Kenyan government is said to have agreed on the text of a new tourism law, which will, when passed and made operational, provide for the formation of new bodies as a new Tourism Authority, likely to be a licensing and inspection platform, and a Tourism Finance Corporation, likely a successor to the Kenya Tourist Development Corporation.

The new law would also provide for regional tourist offices to be opened to facilitate a greater spread of tourism activities across the country. The cabinet also gave the thumbs up for a new comprehensive tourism policy, which will, when passed, guide the sector over the next decade and beyond.

The hotel remarketer tax will require any reseller of a New York hotel room to remit a tax based on the full amount paid by the customer, including service fees and charges. A representative of the city’s law department said a statement of audit procedure will provide more information about the law and give guidance related to more specific business models, including guidance on unbundling packages.

According to the memorandum, the tax on net and additional hotel room rent will apply to New York hotel rooms booked on or after Sept. 1. Hotel room resellers must complete and file a "certificate of registration" with the finance department by Sept. 3.

Samoa: protests against upcoming side switch of road traffic

The small Pacific island country of Samoa is due to change from driving on the right-hand side to the left on September 7, in the first switch since Nigeria, Ghana and Yemen shifted to the right in the 1970s and Sweden did so in 1967.

Since the government announced the plan in 2007, huge protest marches have been held, more than a sixth of the population of around 180,000 people has signed a petition calling for the changeover to be reversed, and a court is expected to rule on its legality later this week.

The American Civil Liberties Union (ACLU) has filed a lawsuit in the U.S. District Court for the Southern District of New York demanding that U.S. Customs and Border Protection (CBP) release details of its policy that allows the agency to search travelers' laptops at U.S. borders without suspicion of wrongdoing. The law suit is an effort to get CBP to respond to a Freedom of Information Act (FOIA) request that the civil liberties group filed in June about the laptop-search policy. Though the FOIA law requires it to give a response within 30 days the agency has not supplied information.

Protesters in the USA angered by the release of the Libyan Basset Ali al-Megrahi, the only man convicted of the 1988 bombing of Pan Am flight 103 over Lockerbie launched a "Boycott Scotland" campaign in the internet. The website BoycottScotland.com is an anonymous Internet protest calling upon Americans to avoid Scotland and Scottish products in protest at al-Megrahi’s release.

The anonymous Internet protest is receiving wide publicity in the US media, including the New York Times, Bloomberg, CNN and Forbes magazine. ETOA, the European Tour Operators Association, has announced to closely monitor the campaign and advises against any tourism boycott of Scotland.

Plaintiff had booked a package tour to Turkey together with his wife and their two children. Because of technical problems, the outward flight to Turkey was delayed for 26 hrs. Plaintiff claimed that because of a depressive psychosis he was suffering from, the fligth delay had caused a depressive mood which had prevented him from enjoying his holidays. Even his wife had not been able to enjoy the holidays as she had to look after him. Both of them had hardly left the hotel room.

Back home in Austria he sued for compensation for loss of holiday enjoyment and some minor expenses he had had becuase of the flight delay.

Upon defendant's appeal Regional Court (Landesgericht Innsbruck) in judgement 2 R 170/09b of June 19, 2009 for the most part dismissed the claim: plaintiff had not mentioned his disease when booking the package tour and same had not been offered as being specifically suitable for mentally ill persons. The depressive mood therfore could not be regarded an adequate consequence of the flight delay. Plaintiff also had failed to explain why he needed specific care.
Posted by Michael Wukoschitz at 1:50 pm No comments:
Labels: Austria, Cases, Compensation, Delays, Diseases, Liability, Moral Damages, Package Tours

Bangladesh has formed a police unit to better protect local and foreign tourists and tourism spots. Another main task for this particular unit will be to look after the nature and wildlife in the tourist spots.

The lack of security and poor infrastructure were largely blamed for lower tourist arrivals in the country's remote tourism spots. It is the purpose of the new police unit to change that.

In July 2003 plaintiffs had acquired timesharing rights (right to use an appartement one week per year) in defandants' hotel at CHF 10.000 and a yearly contribution of CHF 490. The contract term was scheduled until 20.01.2050 (!). In their law suit filed in 2008, plaintiffs sought for termination of their contract by 20.01.2015 and refund of EUR 5.297. They claimed that due to settled case-law the term of a timesharing contract must not exceed 10 to 15 years. As thus their contract therefore was partly void they were entitled to the refund claimed for.

The claim was dismissed by all levels of jurisdiction: Supreme Court (OGH) confirmed the view of the lower instances that it was not the excessive term of contract itself that had to be regarded void but the lack of a right to terminate the contract after expiration of a reasonable term. Even if notice of termination can be given long time in advance, the legal consequences of termination will only become effective at the time of termination. Thus there was no claim to the declare the contract void "pro futuro" and no due claim for refund.

Defendant, a local community, had repaired a street in front of plaintiff's hotel. As the bitumen used was defective, particles came off and were brought into the hotel through the shoes of the guests and caused dirty spots on carpets and furniture.

Austrian Supreme Court (OGH) held that such dirt particles had to be regarded an "immission" due to sec. 364 par 2 Civil Code (ABGB) and constituted a claim for compensation, irrespective of fault. There was a sufficient causal connection even if hotel guests had acted carelessly.

Plaintiff, a man of about 110 kilogramme took a dry toboggan ride with his daughter. Even though the toboggan run complied with technical standards and relevant laws, braking efficiency was poor at steep parts if total weight exceeded 120 kilogramme. When arriving at such steep part, plaintiff tried to slow down the toboggan by using the brakes. As he saw no effect he paniced and screamed. The man at the toboggan in front heard the scream and stopped. Few moments later plaintiff's toboggan drove against the one of the man in front and plaintiff was injured severely.

Austrian Supreme Court (OGH) held that even though plaintiff could have had a safe ride despite low braking efficiency, the operating company was liable for the injury caused by plaintiff's panic reaction and improper attempt to assistance by the man in front because of not having warned of limited braking efficiency. 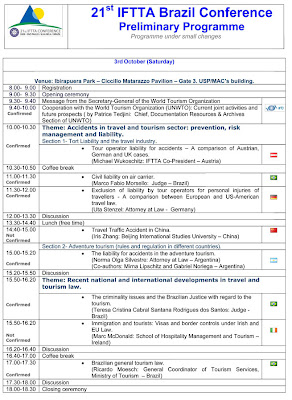 The 21st IFTTA Conference in Brazil is getting close. Toward that end the organizers would like to invite the IFTTA community to attend this annual meeting in Sounth America. About 22 experts from 10 countries are going to present papers, all of them with backgrounds in, or a strong interest in travel and tourism issues. The preliminary programme is already online into the Conference Website.
Moreover, the UNWTO representative will deliver a message on behalf of the UNWTO Secretary-General a.i. at the opening ceremony and talk about the "Current joint activities and future prospects " regarding IFTTA/UNWTO cooperation project.
To additional information about the Preliminary Programme click here.