The Commission has adopted Technical Specifications for Interoperability for control/command and signalling on the conventional trans-European railway network. At the moment, more than twenty different signalling and speed control systems are used in Europe, which means that most international passenger and goods trains still have to stop at the border station to change locomotive. The adopted Decision will allow these incompatible systems to be gradually replaced by a single system known by its abbreviation ERTMS (press release IP/06/404 of European Comission, see here.

The EU Commission's Aviation Blacklist has been published in the Official Journal 24 March 2006 (see http://europa.eu.int/comm/transport/air/safety/doc/flywell/2006_03_22_flywell_list_en.pdf) The publication of the list will allow passengers to make informed choices even when they travel outside the EU, in countries where these flight bans do not apply. The preparation and finalisation of the list is the result of successful co-operation between the Commission, the Member States and the European Parliament. The Commission and the “Air Safety” Committee will continue to monitor airlines and national civil aviation authorities to ensure their adherence to internationally-agreed air safety standards. It will continue to address new threats to European air safety by updating the list when necessary, as well as recognise the progress made by airlines on the list, in order to ensure their removal once their safety deficiencies have been rectified.

As stated by the EU Press Room, "The European Commission has today adopted the first EU list of airlines which are banned in the European Union. This black list of unsafe airlines will now be published on the Commission’s website. The black list has been compiled on the basis of national contributions and after an in-depth analysis with Member State experts. The list consists of 92 companies which face a complete ban and 3 companies which face operational restrictions. From now on the principle will apply that companies banned in one Member State are banned in the whole EU."

No subsequent review of decisions contrary to Community Law

In judgement C-234/04 of 16th March 2006 European Court of Justice ruled that a national court does not have an obligation under EC law to re-open and set aside a judicial decision which has become final, even if that decsision turns out to be contrary to Community Law. 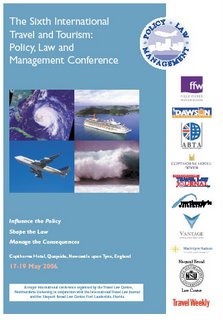 The Travel Industry has had a turbulent year, coping with not only the Tsunami disaster, but also what seemed to be a never ending hurricane season in Florida, the Carribean and Mexico. While all this was happening, the legislators, the regulators, the lawyers and the courts have all been busy. The ATOL scheme - the cornerstone of consumer protection in the industry, is about to undergo a radical review. The High Court has pronounced on the fundamental issue of 'What is a package?'. The EU and the US Supreme Court have had important things to say about disability discrimination in the travel industry, and the EU has brought forth more controversial legislation in the form of the new Denied Boarding, Delay and Cancellation Regulation.
All these topics are of vital importance to the travel industry, to policy makers and to travel lawyers and will be discussed at length in this, the sixth conference in this series hosted jointly by Northumbria University and Nova Southeastern University.
As usual, our prestigious panel of international speakers has been given time to debate the topics at length. The purpose is to provide delegates not only with an in-depth approach to the issues but also for them to be able to enter into a dialogue with speakers.
Additionally, the social programme, the lunches and the conference dinner will give delegates the chance to converse with each other and mingle with the speakers in a more relaxed environment.
Please download the conference brochure, which gives further details on the programme, social events and also a booking form.
To find out more about what the region has to offer in terms of accommodation, events and tourist attractions, please visit the Northumbria Tourist Board's website.
Posted by MDMasseno at 8:53 pm No comments:
Labels: Event, UK
Newer Posts Older Posts Home
Subscribe to: Posts (Atom)