The Alaska Cruise Association filed a federal lawsuit challenging Alaska's head tax on the approximately 1 million cruise-ship passengers who arrive in the state each year. The lawsuit is seeking relief from the $50 fee imposed on each passenger arriving aboard large cruise ships, a fee which was approved by Alaska voters in 2006.

The association argues that the head tax by far exceeds the expenses of services and facilities provided to cruise ships, and in some cases the money is going to fund projects that do not directly benefit cruise-ship passengers.

You can find the press release in German over here (The judgement has not been published yet!):

and a translation in English over here:
Posted by Stephan Keiler at 1:02 pm No comments:
Labels: Airlines, European Union, Germany, Transportation

Germans Highest Court (Bundesgerichsthof) decided yesterday on the complaint of a consumer organisation (Verbraucherzentrale Nordrhein-Westfalen)against the airline Germanwings, with the omission of the use of a clause within general terms and conditions.
Citation: BGH 17.09.2009, Xa ZR 40/08

As Germanwings tried to get the ticket prize by direct debiting but due to the lack of balance of the passenger's account, the debiting failed.

You can find the press release in German over here (The judgement has not been published yet!):

and a translation in English over here:

The Senate voted Wednesday to permit passengers on the Amtrak passenger railroad to transport handguns in their checked baggage. The proposal, approved by a 68-30 vote, seeks to give Amtrak riders rights comparable to those enjoyed by airline passengers, who are permitted to transport firearms provided that they declare they are doing so and that the arms are unloaded and in a securely locked container.

Panic on an Aer Lingus flight to Paris

Passengers on the Aer Lingus flight from Dublin to Paris began shouting out and crying as they thought their plane was about to ditch. The crew accidentally played out a recorded emergency landing warning in French as the plane headed south over the Irish Sea. Around 70 French passengers were reported to be "freaked out" on hearing the warning. The cabin crew quickly realised their mistake and swiftly apologised in French.

The International Air Transport Association (IATA) announced a revised global financial forecast predicting airline losses totaling $11 billion in 2009. This is $2 billion more than the previously projected $9 billion loss due to rising fuel prices and exceptionally weak yields. Industry revenues for the year are expected to fall by $80 billion to $455 billion, a 15 percent drop from 2008 levels. IATA also revised its loss estimates for 2008 from a loss of $10.4 billion to a loss of $16.8 billion. This revision reflects restatements and clarification of the accounting treatment of very large revaluations to goodwill and fuel hedges. IATA industry profit figures strip-out such extraordinary items which are not realized in cash terms.

While the legal debate is continued, the National Business Travel Association last month switched its position and now supports federal legislation on airline passenger rights. Two airline CEOs speaking in August at NBTA's convention in San Diego disagreed with the need for such laws, which have been proposed by the U.S. Department of Transportation and Congress.

Hundreds of thousands of Shia Muslims, particularly from Iran, visit the city of Najaf, which hosts the tomb of Ali bin Abi Talib, cousin and son-in-law of the Prophet Muhammad. Though religious tourism brings millions of dollars of revenue every year, local merchants have complained that Iranian companies have monopolised the industry.

Health ministers from the G7 countries (Canada, France, Germany, Italy, Japan, UK, US), Mexico and the World Health Organisation meet today in Brussels for a special ministerial meeting of the Global Health Security Initiative (GHSI) hosted by the European Commission. The meeting will focus on effective public health measures to respond to the influenza A (H1N1) virus. The timing of this meeting is crucial with respect to the potential for a more virulent wave of the virus in the months ahead. A common statement (or communiqué) setting out the common approaches adopted by the G7 countries plus Mexico and next steps of joint work on pandemic (H1N1) 2009 will be adopted at the meeting followed by a press conference.

Posted by Michael Wukoschitz at 7:02 am No comments:
Labels: European Union, Event, Health, Pandemic, WHO

The European Union is upset about plans by the United States to implement new travel fees for visa-waiver tourists. The $10 fee is part of the Travel Promotion Act which would be put in place in order to help fund a world tourism project that would increase the number of visitors to the US by better communicating America's security policies and competing for visitors. EU is considering retaliatory stances if this new fee is put into place. 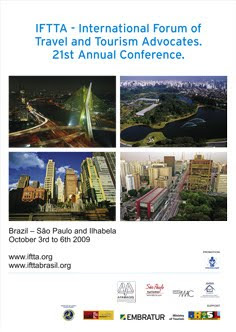 Again this year, IFTTA is organizing its “21st International annual Conference on Travel and Tourism Law” with the themes “”1.Accidents in travel and tourism sector: prevention, risk management and liability, 2.Recent national and international developments in travel and tourism law, and 3.Tourism and its impact on the environment". The conference will happen on October 3rd - 6th, 2009 at Parque do Ibirapuera, São Paulo-Brazil and Pier 151, Ilhabela. Held in a pleasant environment, the IFTTA's conferences became a traditional center of reference on travel and tourism law worldwide among its members. Also, it provides a good opportunity for networking with the global professionals of these industries. The conference will offer outstanding infrastructure of services and will be available simultaneous translation Portuguese/English/Portuguese. In the last edition in Beijing the international IFTTA conference on travel and tourism attracted participants from different countries and was one of the appealing encounters of the academics, authorities, experts and professionals in the areas travel and tourism, distinguishing itself by promoting debates and pointing high important questions about the sector growth and development.Please visit the conference website http://www.ifttabrasil.org/ where you will find the conference program, hotel information, and online registration.
Posted by Goretti at 7:34 am No comments:
Labels: 21st annual conference, Brazil, Conference, IFTTA Brazil, Travel and Tourism Law
Newer Posts Older Posts Home
Subscribe to: Posts (Atom)